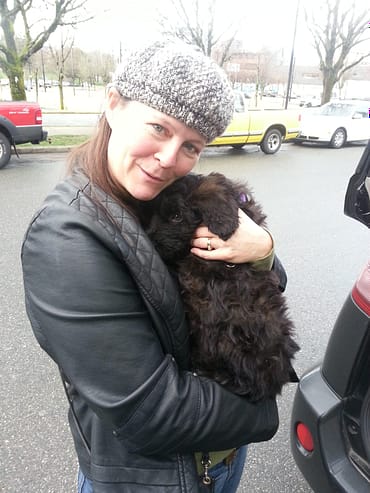 Scout at Day 1 - Going home from the SPCA 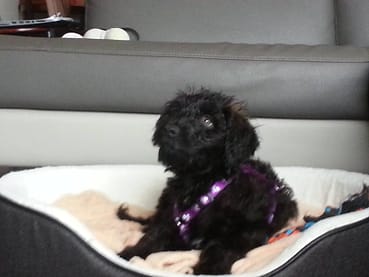 Day 1 - Scout in her bed on first night home

After searching for several months for a rescue dog that fit our requirement for a hypo-allergenic puppy, my husband and I were beginning to think the right dog might never come along. In March, 2016, I met Scout and I realized she was the reason we had such a long search for a dog – we were waiting for her to come into this world and into our lives!

On February 4th, 2016, sixty-six animals, including 34 puppies, were seized in what British Columbia's SPCA said was one of the largest puppy mill seizures in the province's history. I watched the news in horror as images and video of abused dogs played across the TV screen. Their injuries ranged from broken limbs, missing eyes or ears, malnourishment, infections, abscesses, and psychological issues. My heart broke to think of the horrendous cruelty these poor dogs had endured. I called the SPCA that day to see how I might adopt one of them and followed the news and progress of the dogs with avid interest.

On March 2nd, 2016, I went to a mandatory information session, the first of three, planned to educate potential adopters of the special care required to deal with the behavioural and psychological needs of the dogs. I was sickened to see the deplorable condition, both physical and emotional, that the dogs had been in when they came to the SPCA. What a tremendous and incredible commitment the staff and volunteers provided to turn the lives of these dogs around. The countless hours they put in towards health care, cleaning, love and attention, just to get the dogs to trust people so they could be adopted.

The information session was standing room only and I figured my chances of being chosen to provide a home for one of these poor little creatures was slim. However, I still filled out an application and hoped for the best.

Two days later, after a telephone interview, we were invited to come down and view the puppies. We were given entrance into a kennel and were instantly ambushed by a pack of adorable little 10-pound, 12-week-old puppies, all chewing on our shoe-laces and clamouring for our attention. They were all so happy and showed no signs of abuse (thanks to the many efforts and talents of the staff and volunteers). Somehow, we managed to zone in on Scout (formally “No Collar”) – when we picked her up, she just melted into our arms, and we knew she was the one. We took her home and our new lives began.

That first night, while lying in bed, with Scout in her own bed on the floor beside me, I reached my hand over and her nose reached up to touch me. I couldn’t believe how, in less than 24 hours, I had completely fallen in love!

As I work from home, I really missed that daily interaction with another being. But Scout has changed all that. She gets me out for 6 walks a day and introduces me to hundreds of people (everyone talks to you when you have a dog). She lies curled at my feet while I work at my desk. She “helps” me do the household chores (she likes to assist in the sweeping by chasing the broom and disturbing all the dust piles). And she is a great health boost - between my husband and I, we have lost over 30 pounds. Scout has gained most of them, going from a mere 10 lbs when we got her to 40 lbs now at full size.

I can’t imagine our lives without Scout! She has added a richness that we didn’t even know was missing. And I thank the SPCA from the bottom of my heart for everything they did to rescue her and all the others from the “Langley 66”. And even more importantly, everything the SPCA does, on a daily basis, to help the abused, injured, lost, homeless and neglected animals and to create happy futures for them all.